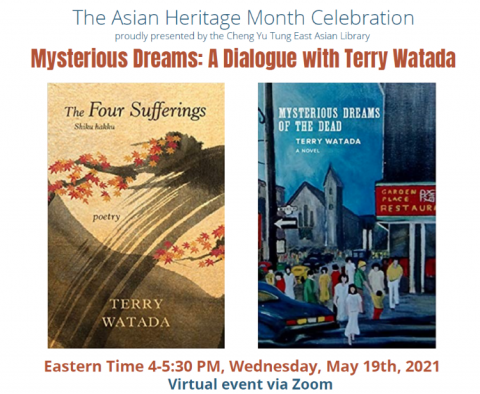 The Cheng Yu Tung East Asian Library, Universisty of Toronto, would like to cordially invite you to join this online event to mark the 2021 Asian Heritage Month and celebrate two new books by Terry Watada. The event will feature a book reading by Terry and a dialogue led by Ken Noma, former President of the National Association of Japanese Canadians (NAJC). Pre-registration is required to get the event link.

MYSTERIOUS DREAMS: A DIALOGUE WITH TERRY WATADA
An Online Event to Celebrate the Asian Heritage Month
Wednesday, May 19, 2021 at 4:00 - 5:30pm EST
Presented by the Cheng Yu Tung East Asian Library

Writer Bio:
Terry Watada is a Toronto writer with many publications to his credit including three novels, five poetry collections, a short story collection, two manga, two histories about the Japanese Canadian Buddhist church, and two children’s biographies. His latest books are Mysterious Dreams of the Dead (Anvil Press, Vancouver, 2020), a novel centring on the third generation of Japanese Canadians, and The Four Sufferings (Mawenzi House Publishers, Toronto 2020), a volume of poetry. He also maintains a monthly column in the Vancouver Bulletin Magazine. 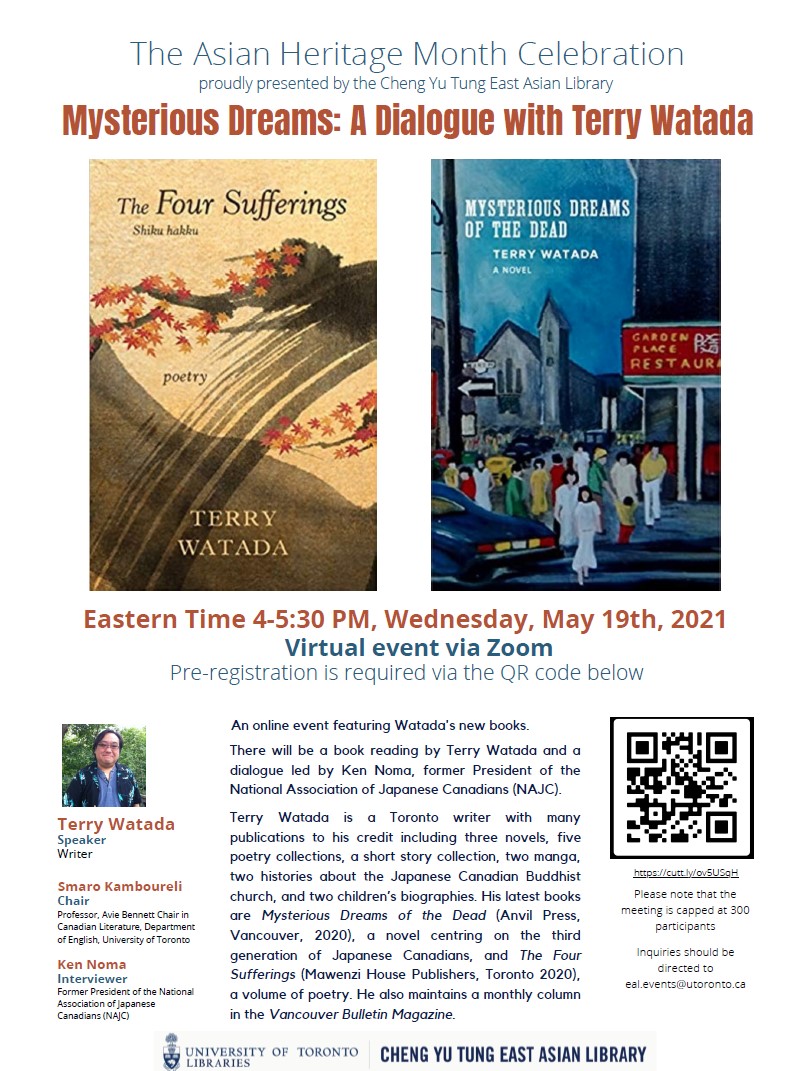 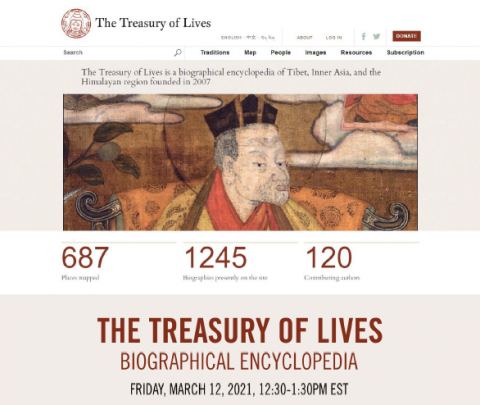 The Treasury of Lives Biographical Encyclopedia

The Treasury of Lives is a biographical encyclopedia of Tibet, Inner Asia, and the Himalayan region. In development since 2007, the online resource provides accessible and well-researched biographies of notable scholars, masters, or leaders in traditional Himalayan and Inner Asian society and culture who are deceased and who were native to the region. Biographies are complemented by a range of associated data such as incarnation and monastic office lineages, social roles, and religious traditions, as well as a dynamic map and multiple timeline visualizations. To date, 120 authors have contributed 1245 biographies of people spanning the 7th through 21st centuries.  Nearly 700 places have been mapped. The database is searchable by BDRC ID, phonetic renderings and Wylie transliteration.

In this presentation, features of the site will be introduced with additional focus on subscriber resources, which include custom map and timeline tools, data exports, syllabi and an advanced search.

Join us on Zoom 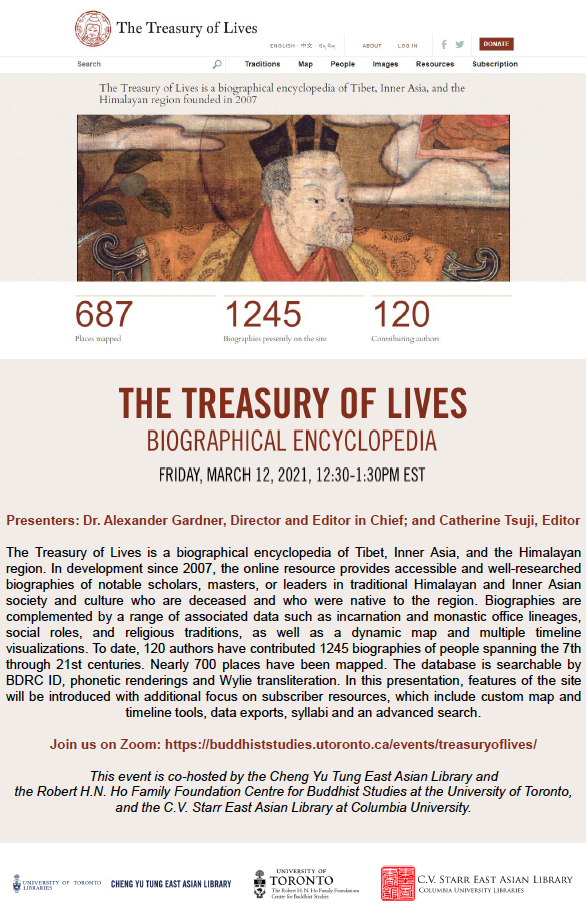 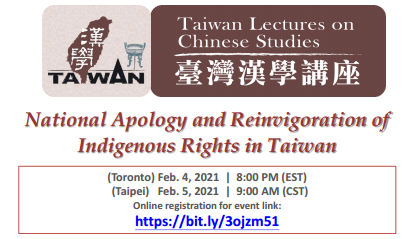 National Apology and Reinvigoration of Indigenous Rights in Taiwan

Dr. Awi Mona is Director & Associate Professor of Law and Indigenous Studies, National Dong Hwa University 國立東華大學 and Director, Legal Aid Foundation Indigenous Branch, Taiwan. He is the first indigenous person in Taiwan to obtain a PhD in law. His research is primarily in the areas of indigenous law, aboriginal title law, and cultural and education law. Over the past decade, since his return from Seattle, he has continually collaborated on indigenous rights movements with the local communities in Taiwan and has provided legal and policy advice on many indigenous laws and related issues. Awi is a member of the Seediq Nation.

This event is co-presented by the Cheng Yu Tung East Asian Library of the University of Toronto, the National Central Library (Taiwan), and the Center for Chinese Studies (Taiwan), as part of the "Taiwan Lectures on Chinese Studies(臺灣漢學講座)" program. 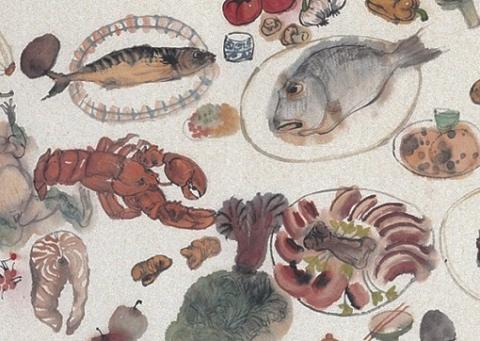 Viewing Gastronomy from the Garden of Contentment

Chinese gastronomy, as delineated in the seminal Qing dynasty cookery manual Suiyuan shi dan (隨園食單, or Recipes from the Garden of Contentment), is carried on the shoulders of three entities: the cook, the critic, and the ecosystem in which they exist. Using the culinary guidelines laid out by the manual, we examine the roles and dynamics between these three entities and offer a framework for broadly understanding Chinese cuisine, its dishes, and how they change. We then apply this framework to Chinese Canadian cuisine as a case-study to demonstrate how it can be used to understand the historical development of the modern cuisine from its Southern Chinese working-class roots.

Dr. Sean Jy-Shyang Chen is the award-winning translator of the Recipes from the Garden of Contentment (Suiyuan shi dan, 隨園食單), thoroughly annotating the text with details on ingredients and culinary techniques crucial for understanding the 18th-century work. He has a lifelong interest in food-ways and Chinese history and is currently working on a translation and annotation of a Song Dynasty culinary work. His other interests include using computational techniques to analyze recipes and cuisines to better understand their common roots. He holds a PhD in biomedical engineering from McGill University, Canada, and is a senior research engineer for computer vision and machine learning in medicine.

Professor Graham Sanders is Professor of Classical Chinese literature at the University of Toronto. His work focuses on narrative depictions of the composition, performance and reception of poetry in pre-modern China. His publications include a chapter in Idle Talk: Gossip and Anecdote in Traditional China (2013), an annotated translation of Shen Fu’s Six Records of a Life Adrift (2011), and a book on poetic performance, Words Well Put: Visions of Poetic Competence in the Chinese Tradition (2006). His annotated, bilingual translation of the two most important collections of Tang poetry anecdotes is forthcoming as a volume in De Gruyter’s Library of Chinese Humanities.

Professor Linda Rui Feng is a cultural historian of premodern China, and her research is focused on the interconnections among cultural technologies, forms of knowledge, and the various senses. Over the past few years, she has taught two courses related to food: “Cultural History of Food in East Asia” (EAS219) and currently, a First-Year course “Consumption, Taste and Culture in East Asia” (EAS196). 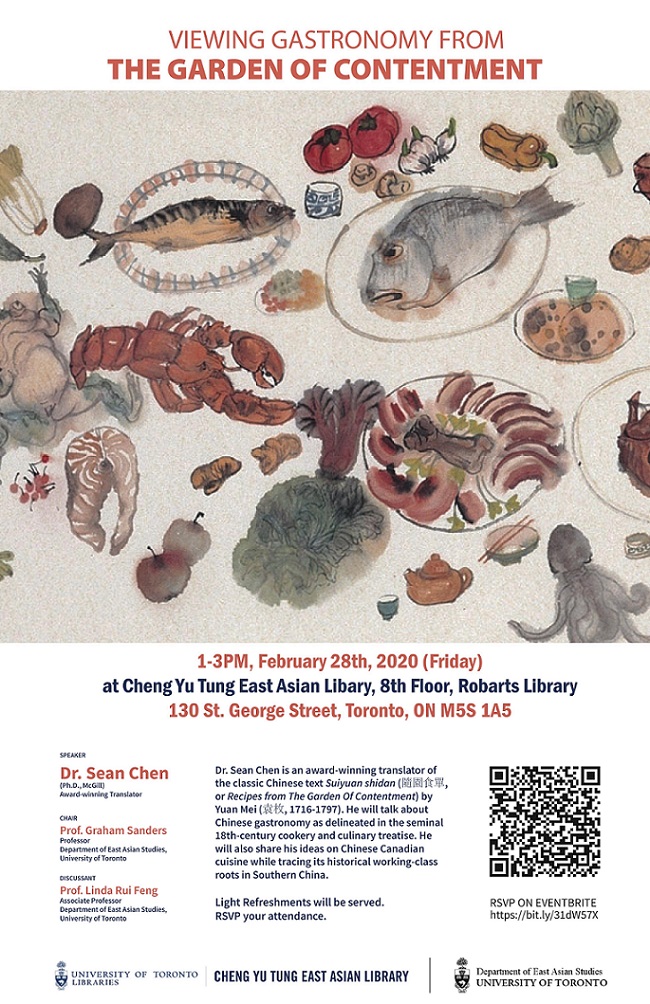 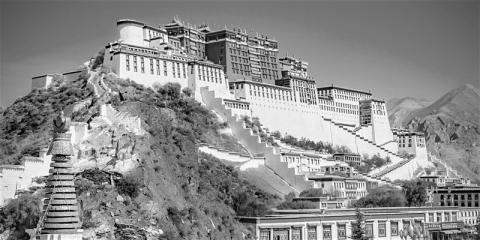 This session will provide faculty, students, and visitors with an overview of the latest developments in Tibetan librarianship, digitization project, online resources, and newly received publications at the Cheng Yu Tung East Asian Library of the University of Toronto.

Light lunch and refreshments will be provided.

Click here to view the photos of this event... 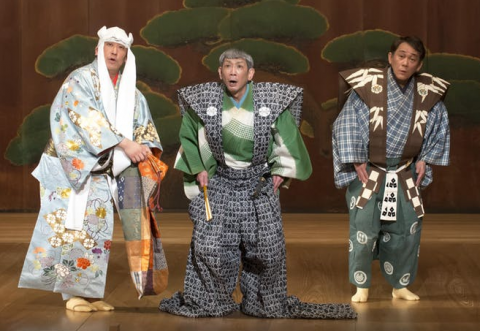 Join us for a lecture on kyogen (狂言), a form of traditional Japanese comic theatre, with renowned Kaoru Matsumoto (松本薫).

Kaoru Matsumoto was so enthralled by a performance by Sengoro Shigeyama XII (Sensaku IV) that he began following the renowned Kyogen actor from one appearance to the next, eventually becoming his student in 1974.

Born in 1951, he debuted on the Kyogen stage at age 23 in a production of “Melon Thief” (瓜盗人). He subsequently appeared in “Sanbanzo” (三番三) in 1988; “Fox Trapping” (釣狐) in 1993; “Hanago” (花子); as well as in many overseas performances. In 1984, he established Sanshokai with Masami Amitani and Yasushi Maruishi, and held five performances every year for 27 years.

As a performer who was once a fan, Mr. Matsumoto’s consideration of his audiences is clearly apparent not only on stage but in every facet of his art. Holding his teacher Sensaku IV as the standard to which he constantly strives, he continues to study and develop his own, distinct Kyogen. His hobbies include sipping coffee while staring off into space.

Admission is free by registration, with limited seats available. Refreshments will be served, and everyone is welcome.

The theme for LiterASIAN Toronto 2019 is Looking to the Future: The evolving narrative of Asian Canadian fiction.

Photos of this event can be found here: https://www.facebook.com/pg/UofTEastAsianLibrary/photos/?tab=album&album_id=2523584881299347 (No registration is required to view the photos).

Since the late-1700s, people of Asian origin have made important contributions to Canadian heritage and identity. Fiction written by Asian Canadian authors have evolved and diversified, ranging from the origin immigrant story to achieving the Canadian Dream to looking beyond into the future with science fiction and fantasy tales. Looking to the Future discusses how the world has changed over time and how fiction represents these changes. Each author panelist will discuss their work and how their narrative have evolved over time as the literary landscape changes continuously.

We are also celebrating the publication of Immersion, a book of fifteen Asian speculative fiction stories from around the world and a collaborative project by Asian Canadian Writers’ Workshop, Ricepaper Magazine and Dark Helix Press. Editor JF Garrard will be introducing the book and authors Derwin Mak and Serah Louis will be reading an excerpt from their short story published in this anthology.

Arlene Chan, author, Chinatown historian, and retired librarian, has written seven books and contributed to numerous publications about the history, culture, and traditions of the Chinese in Canada, some shortlisted for the Ontario Speaker’s Book Award, Heritage Toronto Book Award, Silver Birch Award, and Red Cedar Award. Her work has been recognized with the Heritage Toronto Special Achievement Award, Queen Elizabeth II Diamond Jubilee Award, and Woman of Distinction Award.

Carrianne Leung is a fiction writer and educator. She holds a Ph.D. in Sociology and Equity Studies from OISE/University of Toronto. Her debut novel, The Wondrous Woo, published by Inanna Publications was shortlisted for the 2014 Toronto Book Awards. Her collection of linked stories, That Time I Loved You, was released in 2018 by HarperCollins and in 2019 in the US by Liveright Publishing. It received starred reviews from Kirkus Reviews, and was named as one of the Best Books of 2018 by CBC, That Time I Loved You was awarded the Danuta Gleed Literary Award 2019 and was shortlisted for the Toronto Book Awards 2019 and long listed for Canada Reads 2019.

Thea Lim is the author of An Ocean of Minutes, which was shortlisted for the 2018 Scotiabank Giller Prize, and longlisted for Canada Reads 2019. Her writing has been published by Granta, The Paris Review, The Guardian, The Globe and Mail, The Southampton Review and others. She holds an MFA from the University of Houston and previously served as nonfiction editor at Gulf Coast. She grew up in Singapore and now lives with her family in Toronto, where she is a professor of creative writing.

Derwin Mak’s story “Transubstantiation” won the Aurora Award for Best Short Fiction. The anthology The Dragon and the Stars, edited by Derwin and Eric Choi, won the Aurora Award for Best Related Work. Another anthology, Where the Stars Rise, edited by Lucas Law and Derwin, won the Alberta Book Publishers Award for Speculative Fiction. The anthologies have stories by overseas Chinese or Asian writers to get their viewpoints and experiences in science fiction and fantasy. His novels The Moon Under Her Feet and The Shrine of the Siren Stone are available again from Dark Helix Press. Derwin’s stories have a range of topics, especially the interaction of religion with science and politics (“Transubstantiation”, The Moon Under Her Feet), political power (“Songbun”), and LGBTQ+ issues (“XY-Girls”, “72 Virgins”).

Serah Louis is a 21-year-old Canadian writer of Indian descent. She is currently studying Biology and Professional Writing and Communications at the University of Toronto, Mississauga campus. She loves homemade biriyani and a good cup of chai and you’ll find her bookshelf cluttered with works ranging from J.R.R. Tolkien to Rabindranath Tagore.

LiterASIAN Toronto 2019, an extension of the LiterASIAN festival in Vancouver, is co-presented by the University of Toronto‘s Asian Canadian Studies program at University College, the Cheng Yu Tung East Asian Library, and Asian Canadian Writers’ Workshop. 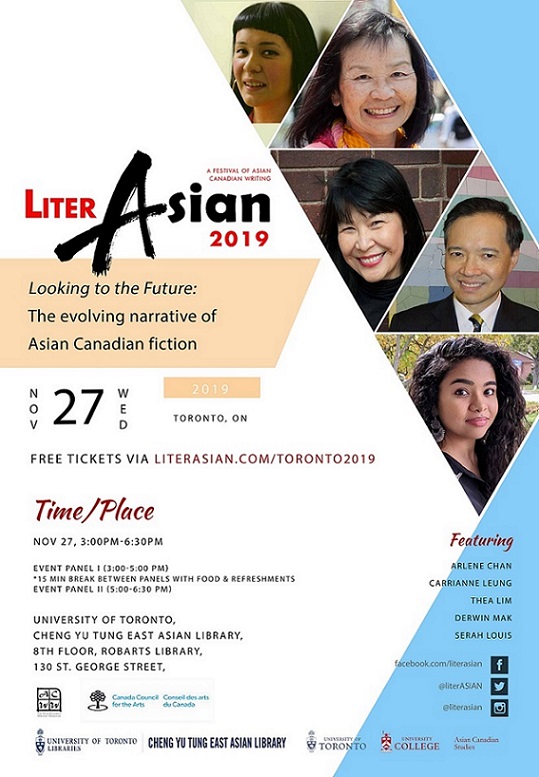 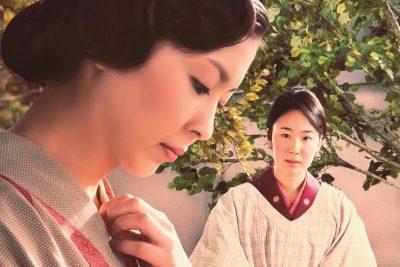 - SOLD OUT - Please like us on Facebook so that you will be notified for the next event!

Join us for a special and rare screening of the Japanese drama The Little House (小さいおうち), based on the book by award-winning author Kyoko Nakajima 中島京子 who will be at the Q&A session at the end of the film screening.

Set in Japan in the 1930s and 1940s, the story introduces Taki Nunomiya, an elderly woman and former housemaid, looking back on her golden years. The narrative that follows delivers striking stories of love and human connections during a time of war, spanning from Yamagata to Tokyo. The film stars Haru Kuroki, who won the Silver Bear for Best Actress in this film at the 64th Berlin International Film Festival. Directed by Yoji Yamada 山田洋次.

Presented in Japanese with English subtitles. RSVP is required.

Co-presented and generously supported by: Toronto International Festival of Authors, The Cheng Yu Tung East Asian Library at the University of Toronto Libraries, and The Japan Foundation, Toronto. 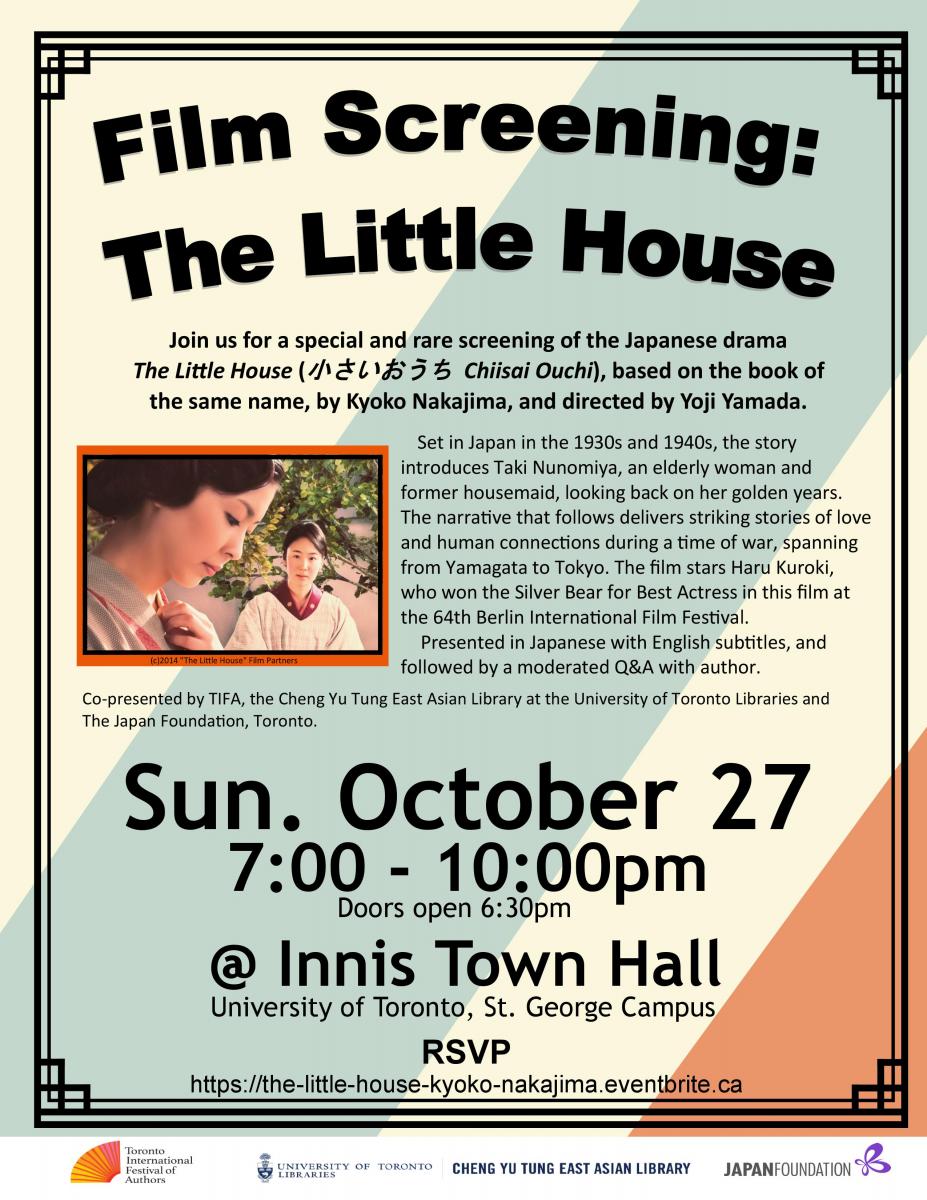 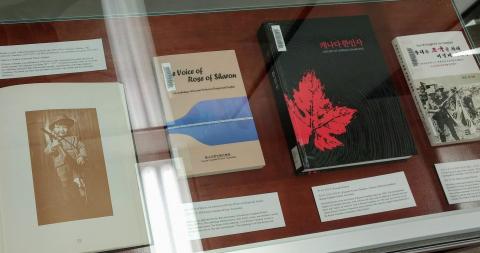 A showcase of our Asian Canadian Studies collection. The display cases are located behind the old reference desk. 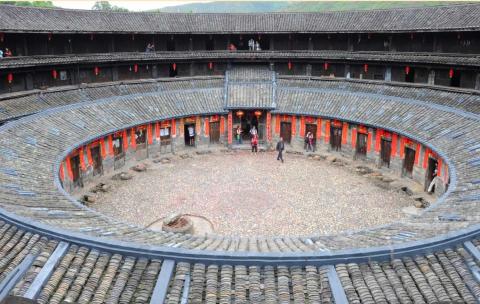 The Hakka Odyssey: Identity, Culture & Beyond - An Exhibition 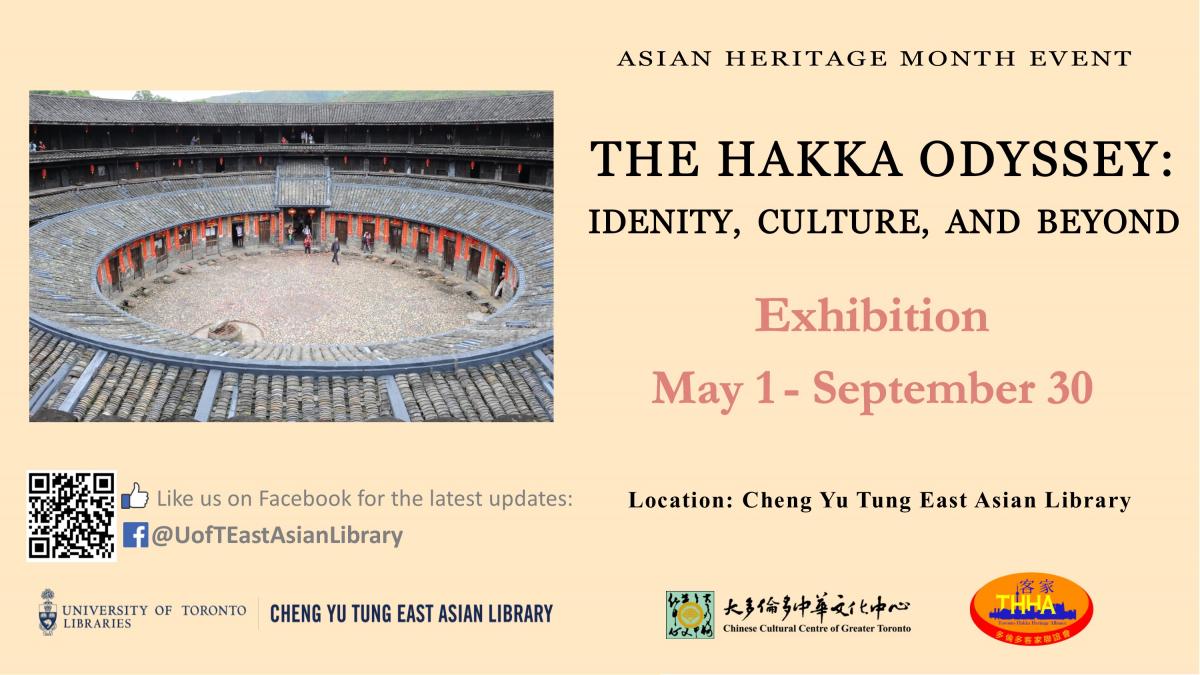